Mayors for Peace is a worldwide organisation of cities devoted to achieving peace, disarmament and, in particular, the elimination of nuclear weapons. The network benefits from the support of more than 7,900 member cities from 164 countries and regions around the world, representing in excess of 1 billion citizens.

The organisation’s activities are framed within the UN’s 2030 Agenda for Sustainable Development, and in particular goal 11 (Make cities and human settlements sustainable), goal 16 (Promote peaceful, inclusive and fair societies) and goal 17 (Strengthen partnerships and networking to achieve these goals).

In order to promote specific actions in the region and to underpin the role of local governments in building more peaceful societies throughout the continent, the European executive cities have regrouped and decided to set up the European chapter of Mayors for Peace.

The European chapter shall be formed by the European executive cities of Mayors for Peace: Hannover (Germany), Volgograd (Russia), Malakoff (France), Manchester (the UK), Ypres (Belgium), Biograd na Moru (Croatia), Granollers (Spain), Frogn (Norway), Sarajevo (Bosnia and Herzegovina), Grigny (France) and Cervia (Italy). As leader cities of their respective regions, these cities shall also direct and manage the national chapters for their country. Accordingly, the European member cities shall be represented by the executive/leader city of their country and the technical secretariat of the European chapter. 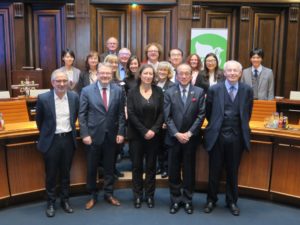 The establishment of this association reflects the desire to continue networking and pooling the efforts to promote peace and human rights that have been made by the municipalist movement to progress towards a fairer, more peaceful, and more sustainable world.